The use of religious selection in state school admissions significantly reduces the chance of parents being offered their first choice school, new research by the Fair Admissions Campaign (FAC) has revealed.

Following the publication of the Government’s official school preference data last week, the FAC compared the proportion of parents in each local authority who were offered their first choice secondary school to the proportion of secondary places in each local authority that are subject to religious selection. The analysis found that, on average, parents living in local authorities with a high proportion of religiously selective schools were far less likely to be offered their first choice than parents in areas with relatively fewer religiously selective schools.

The findings reinforce concerns that the Government’s proposal to drop the so-called 50% cap on religious selection and allow new and existing religious free schools to select all of their places on the basis of religion will have a hugely detrimental impact on the education system. Since the proposals were announced by the Prime Minister in September last year, a spate of research has been produced demonstrating that the 50% cap has significantly boosted both integration and social mobility in schools, and that removing it is likely to lead to more ethnically and socially segregated schools.

Now that the FAC’s analysis has also revealed that the proposal would reduce the access of local parents to their preferred schools, the Government is likely to face fresh questions as to why it is pursuing a policy so obviously detrimental to parents and children.

Fair Admissions Campaign spokesperson Richy Thompson commented, ‘The Government is proposing to lift the cap on religious selection in school admissions in the name of meeting parental demand, but today’s findings demonstrate that precisely the opposite will occur. This research has nothing to say about the pros and cons of faith schools in general, only about whether or not our education system is set up so as to allow for the fair access of local parents to their preferred schools. This is the principle on which our entire school admissions system should be based, but unfortunately the evidence is very clear that religious discrimination detracts significantly both from fair and equal access and from parental choice.

‘Faith schools, like all other state-funded schools, are paid for by everyone and should be open to everyone. The fact that the Government is proposing to spend more public money on schools that are not open to all and which reduce local access is unconscionable, and makes a mockery of the “Schools that work for everyone” slogan with which the policy was launched. Religiously selective schools are not schools that work for everyone, they are schools that discriminate, divide, and turn away local children at the gate.’ 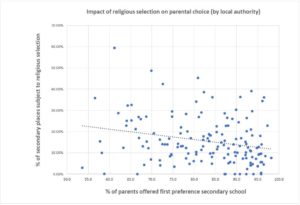 Supporters of the campaign include the Accord Coalition, the Humanists UK, Professor Ted Cantle and the iCoCo Foundation, the Association of Teachers and Lecturers, British Muslims for Secular Democracy, the Campaign for State Education, the Centre for Studies on Inclusive Education, the Christian think tank Ekklesia, the Hindu Academy, the Green Party, the Liberal Democrat Education Association, Liberal Youth, the Local Schools Network, Richmond Inclusive Schools Campaign, the Runnymede Trust, the Socialist Educational Association, and the General Assembly of Unitarian and Free Christian Churches.