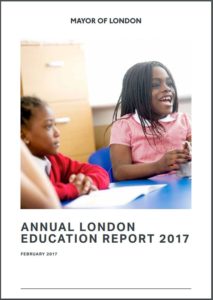 The proportion of London pupils who do not get a place at any school of their preference is significantly higher in areas containing a large number of religiously selective schools, analysis of the Mayor of London’s Annual London Education Report 2017 has found.

Launched today at a special education conference in City Hall, the report assesses how well London’s education system is meeting the Mayor’s aim of ensuring that ‘every young Londoner, regardless of background, [has] the chance to fulfil their potential’. It finds that the two worst performing boroughs in terms of pupils’ access to their preferred schools are Kensington and Chelsea (K&C) and Hammersmith and Fulham (H&F), both of which are also home to the highest proportion of school places that are subject to religious selection criteria of all London boroughs.

The report states that ‘The areas in which the lowest proportion of pupils secured their first choice primary schools were Kensington and Chelsea (68.3 per cent) and Hammersmith and Fulham (71.9 per cent)’. However, it notes that ‘a more pressing issue than securing a top preference is when pupils do not get a place at any school of their preference’, again revealing that K&C and H&F are the worst performing boroughs in this regard. At secondary level 14.1% and 16.2% of pupils in K&C and H&F respectively did not get into any of their preferred schools, which is compared to the inner London average of just 4.5%.

The figures suggest that the access of local parents to their local schools is significantly negatively impacted by the faith-based admissions criteria, with those living in areas where there are lots of religiously selective schools the worst affected. Despite this, the Government recently announced that it plans to remove existing rules which require new state-funded religious schools to keep at least half of their places open to local children irrespective of religion or belief, which has been the case since 2007. The move to drop this so-called 50% cap was proposed, in part, on the basis that it would serve to improve parents’ choice, a justification that is entirely undermined by this latest analysis.

A spokesperson for the FAC commented, ‘It should surprise no one that those areas in which more schools are able to turn away children on the basis of religion and belief are the same areas in which the fair access of families to their local schools is lowest. Every shred of available evidence in recent years has demonstrated that religious selection is detrimental not just to parental choice but to ethnic integration and social mobility too, but the Government continues to ignore this evidence. Even so, we will continue to ensure that the research and data is seen by both the Department for Education and the religious organisations running these schools, who might one day recognise how many social ills this kind of discrimination is causing.’

The FAC wants all state-funded schools in England and Wales to be open equally to all children, without regard to religion or belief. The Campaign is supported by a wide coalition of individuals and national and local organisations. We hold diverse views on whether or not the state should fund faith schools. But we all believe that faith-based discrimination in access to schools that are funded by the taxpayer is wrong in principle and a cause of religious, ethnic, and socio-economic segregation, all of which are harmful to community cohesion. It is time it stopped.