Yesterday Damian Hinds MP sponsored a debate in Westminster Hall in which a number of MPs quoted statistics allegedly supporting the notion that Catholic schools are more diverse in their intakes than other schools. Many of the claims made have been analysed by the Fair Admissions Campaign in two previous posts, one after Mark Hoban MP organised a similar debate in February, and a second after controversy in March over a prominent private Catholic school falling out with its diocese over plans for it to become a Free School.

However, one claim made by Mr Hoban and others yesterday was that Catholic schools take a more deprived intake, based on something called the Income Deprivation Affecting Children Index (IDACI).

IDACI measures the proportion of children in a small area (known as a lower super output area, or LSOA) that live in low income households. The Government provides a tool allowing individuals to look up, for any postcode, how deprived the area surrounding that post code is, as a rank against all other areas nationally. For example, if the tool returns a score of 0.178, then this means that the post code is in the 18% least deprived in the country.

This claim is based on the Catholic Education Service’s (CES’s) analysis of where pupils at its schools live. It has calculated the scores of all its pupils and all pupils at other schools, broken them into 10% bands, and compared them. It finds:

The graphs below, constructed from data provided by the DfE, compare Catholic schools with all schools in England. The horizontal axis represents the level of deprivation, starting with the most deprived 10% of areas on the left and continuing in deciles to the least deprived 10% on the right. The coloured blocks show what proportion of children lived in areas with each level of deprivation. 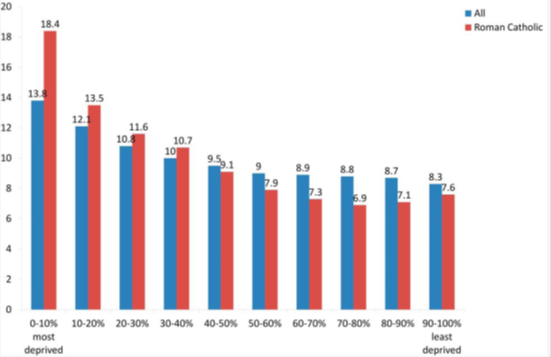 The index does not show dramatic changes from year to year, so that this graph is similar to that for 2012. The first pair of columns shows that 13.8% of all primary school children lived in the most deprived 10% of areas, compared to 18.4% of children at Catholic primary schools. The second pair shows that 12.1% of all children lived in the next most deprived area, compared to 13.5% of children at Catholic schools, and so on. Fewer children in Catholic primary schools came from the more advantaged areas to the right of the graph. 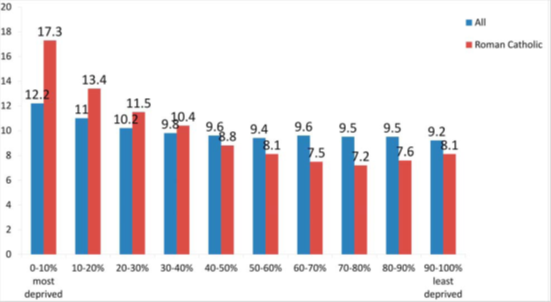 The findings here are broadly similar to those for the primary sector, showing that pupils at Catholic secondary schools came disproportionately from more deprived areas.

But is it true that pupils at Catholic schools come disproportionately from more deprived areas? Surely some consideration of the locations of the schools is needed to make such a claim?

The Fair Admissions Campaign has done such an analysis, running the postcodes of all Catholic and other schools through the IDACI tool. Here’s what we found:

The question though is whether Catholic schools are, according to IDACI, disproportionately more likely to take deprived pupils, given the areas in which they are located. Doing a slightly complicated analysis (finding the relative difference between each school band and its pupil band, and then comparing these figures for the Catholic and other schools), we have come up with a model where we calculate a new ‘score’, where anything positive means that Catholic schools under-take pupils in the relevant band when compared with other schools, and anything negative means that they over-take. 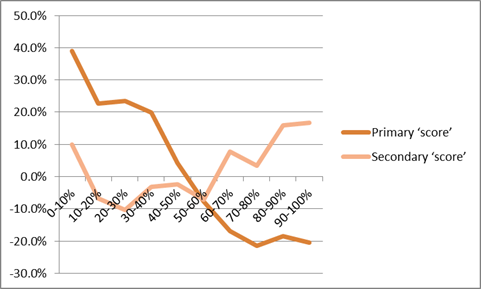 So – can the CES claim that it takes more deprived pupils, apart from the very most deprived, at the secondary level? No: first of all because this is just one model and may not be accurate. And secondly because a big issue with IDACI is that we are comparing how deprived different areas are, and not how deprived the pupils themselves are. It is possible that certain schools only take the better off pupils in any individual LSOA, which contains around 1,000-3,000 pupils. Only by looking at a measure of deprivation of the pupils themselves, and not of the areas in which they live, can get around this problem. And this is what the Government’s preferred measure of free school meal eligibility does.

In the debate yesterday, one MP commented that ‘It is worth putting on record that in [2013] the difference in the number of those receiving free school meals nationally and of those receiving them in Catholic schools was about… 2% [in absolute terms]. It is worth putting the scale of the difference into the context.’ (i.e., the difference is quite small.) This doesn’t seem to us to be that small, when nationally 15% of secondary pupils and 18% of primary pupils are eligible for free school meals.

But as we have seen, Catholic schools are significantly more likely to be in deprived areas than other schools. Given this fact it is even more surprising that they take fewer pupils eligible for free school meals than the national average – we would expect them to take more.

As with IDACI, the more accurate thing to do is to take into account this context, and work out how many more or fewer pupils each type school takes that are eligible for free school meals, compared to what would be expected given the school’s locations. We have done this already for secondary schools. We found that in an absolute sense, Catholic secondary schools take 5% fewer pupils than would be expected; in a relative/proportional sense, they take 28% fewer. An earlier version of the same analysis found that Catholic primaries are even less inclusive still. And our findings hold even if you look at larger local comparisons than we chose to go with, such as just considering schools in large counties.

However, IDACI does not consider how deprived the pupils’ families are. Free school meal eligibility does this. Here we see at both primary and secondary level it is clearly the case that Catholic schools take too few pupils eligible for free school meals. There is also ample wider evidence supporting this finding from a variety of different perspectives.

With all of that said, we think the conclusion to all this should be that it’s very disappointing that the Catholic Education Service only presents half the analysis with respect to IDACI (the half that is more favourable towards it), while some of its supporters dispute the significance and validity  of the alternative measure preferred by this and previous Governments (which just happens to be less favourable towards it).